I had an excellent dolly score this week, with three Monster High dolls, a Fashionista Barbie, a One Direction doll, Chelsea and Stacie dolls, three Steffi Love dolls, a couple of Disney dolls and several Barbie and similar clothing. I also found  a Teksta robot puppy, a Five Nights at Freddy’s figure, a Chub City figure, a Fartist Club figure, and lots of other little bits and pieces. I also found Iron Maiden patch! 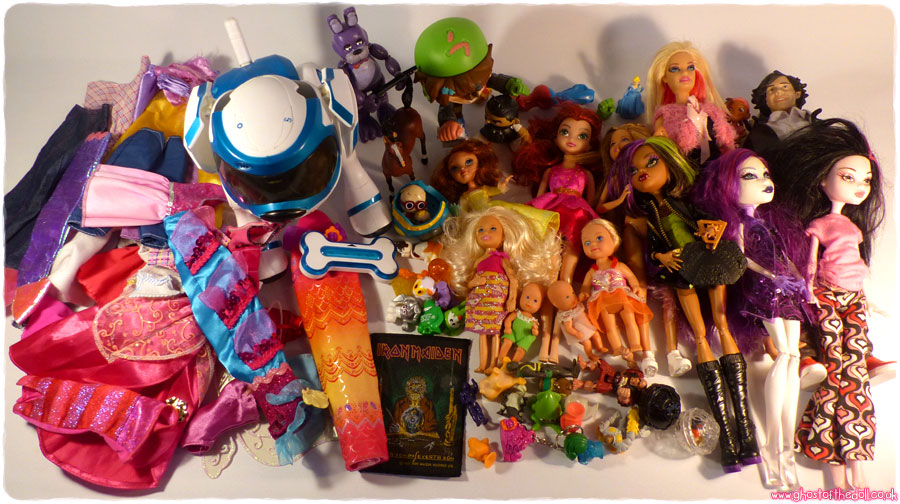 Spectra Vondergeist (Ghouls Night Out) on the left is missing a few small bits, but I have hew shoes already and just ordered her hat and belt. Clawdeen Wolf (New Scaremester) in the middle is nearly complete, so no need to buy anything extra for her. Draculaura (Basic) on the right was nude so have dressed her in a spare Draculaura dress (Roadster), and just ordered some shoes (Ghouls Rule, because they’re fab!). 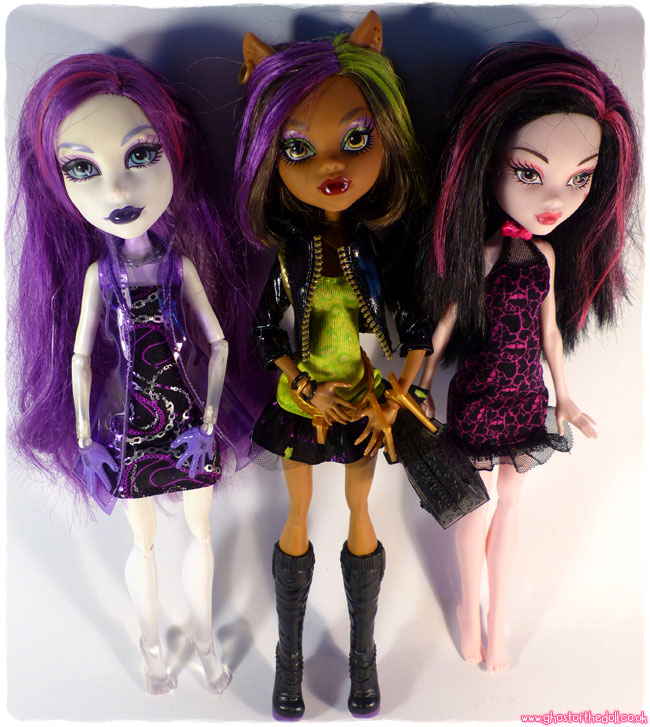 The Fashionistas Barbie on the left is wearing the wrong clothe, and has also has a little hair cut. Stacie in the middle is from the Sisters Sleeptime set, and a rare version with a central parting. Chelsea on the right possibly came holding a bunny or Easter basket. 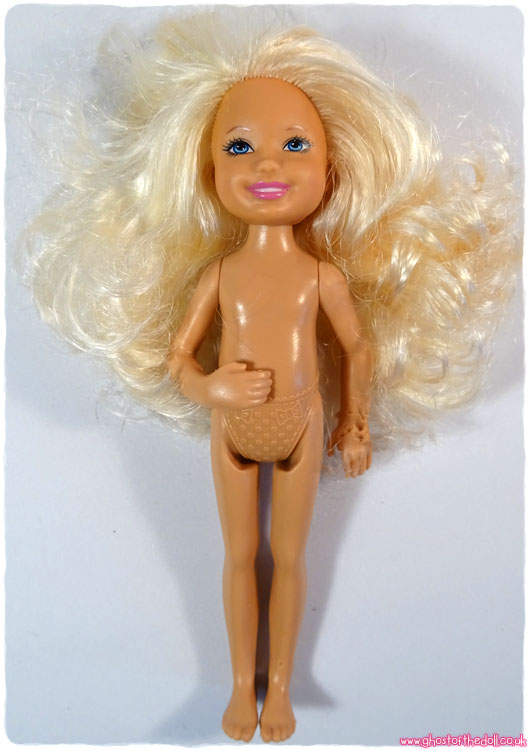 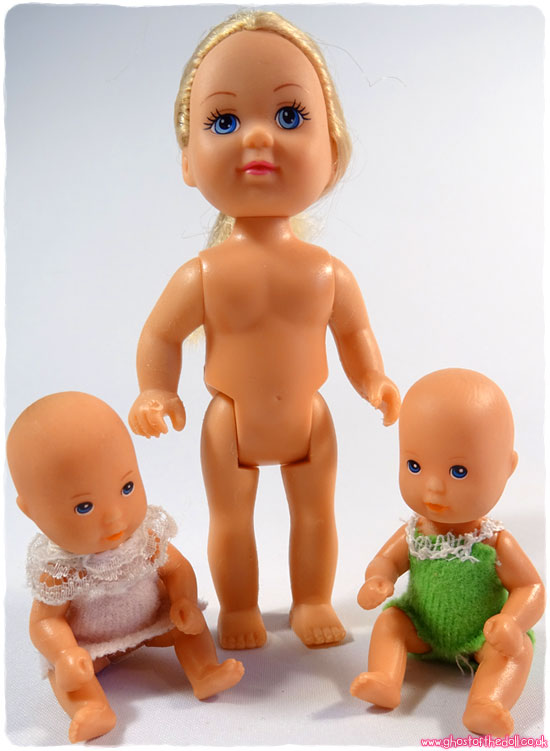 This one is a wave 3 Harry doll, wearing all of Liam’s clothing.

To the left is a Princess Sophia the First, wearing her sister Amber’s dress and fan. To the right is Pirate Fairy Rosetta. She’s missing her wings, which attached via velcro on the back of her dress.

I had to do a bit of minor repair work where a battery had leaked, but it’s good as gold now! Came with its bone too, which lights up when you hold it up to its mouth. 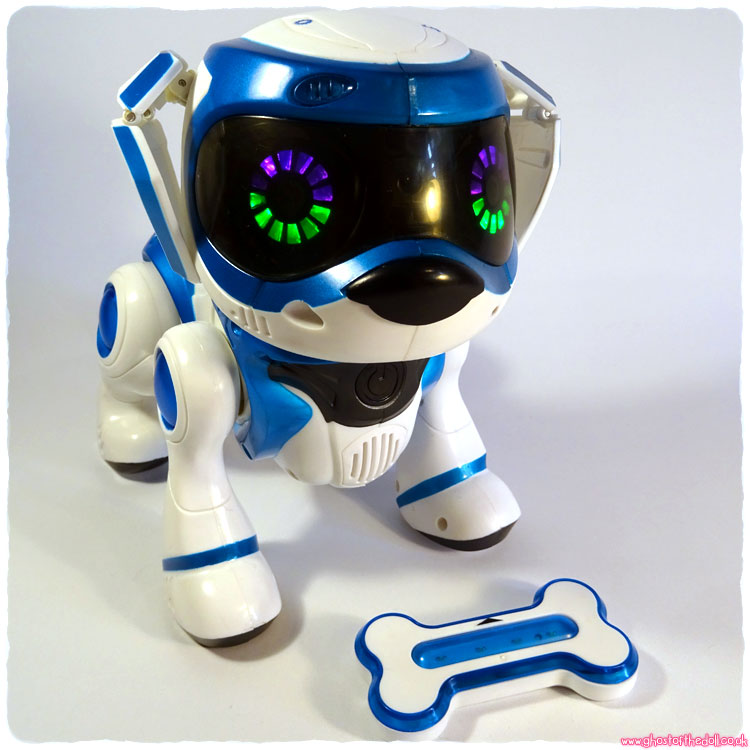 Both these figures are missing an arm or hand. Farty Flip (left) was missing his left hand, so I found something to replace it. Trace (right) is missing a right arm, which he is just going to have to live with! He should be holding a removable book in his left hand and a pen in his right. 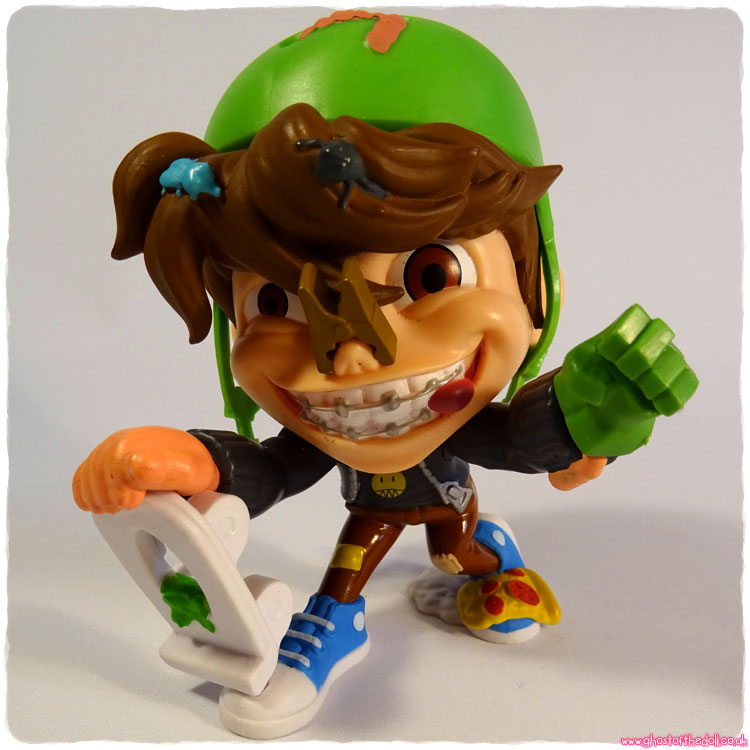 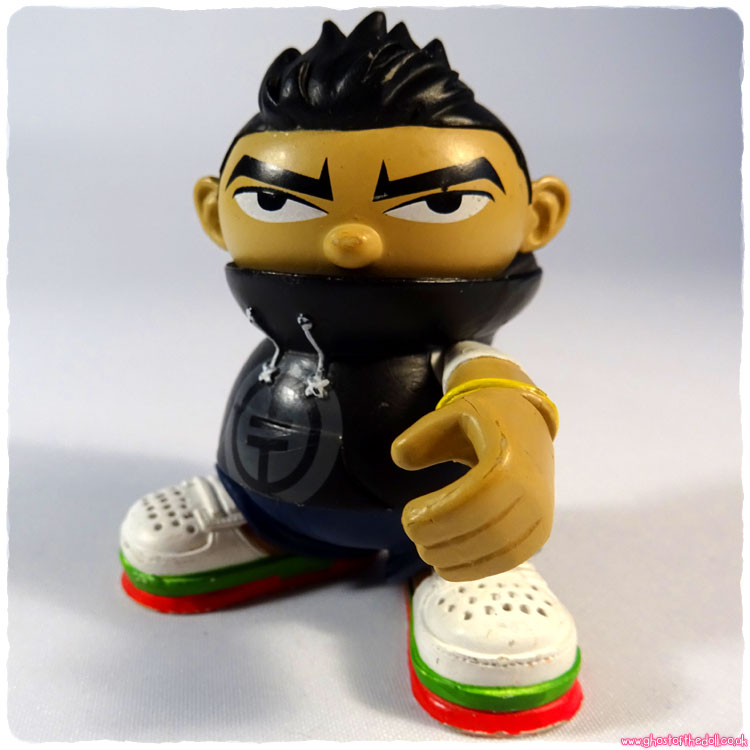 I had no idea who this crazy rabbit dude was when I saw it. I just knew I had to have it! 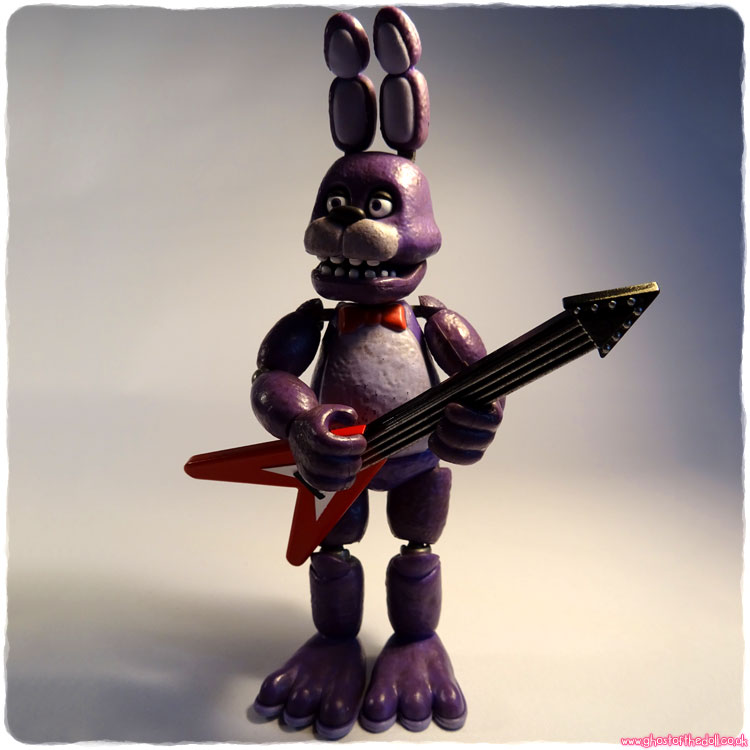 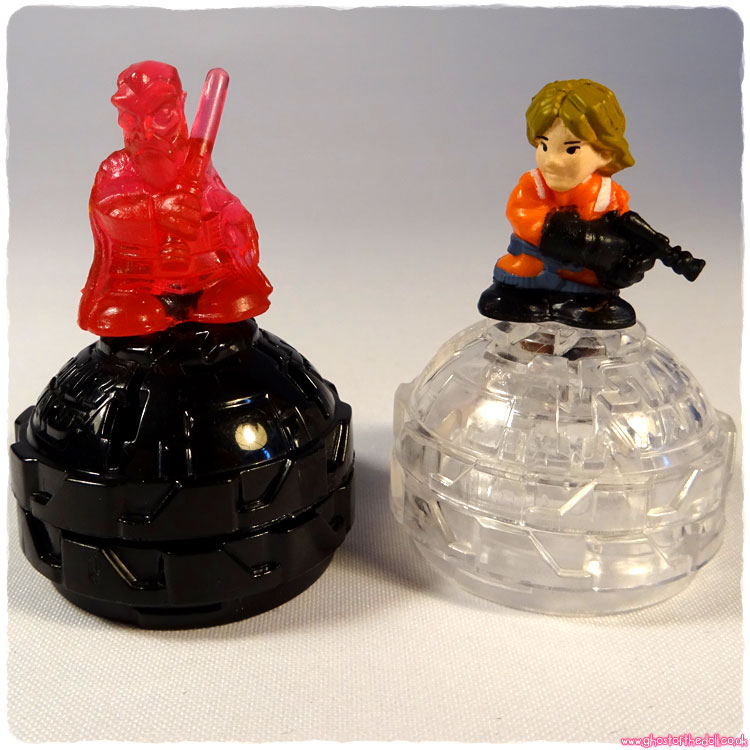 Produced by Safari in 1997, there were several breeds. 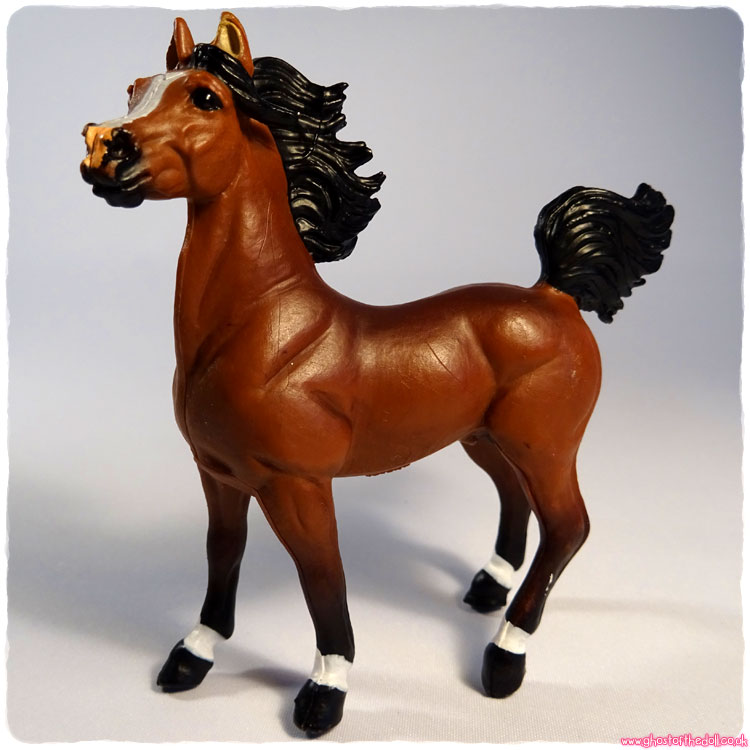 These little rubber and plastic figures came free on blister packs in various combinations with the Doctor Who magazine during 2013 (Matt Smith era). I have four more DALEKS in different colours. 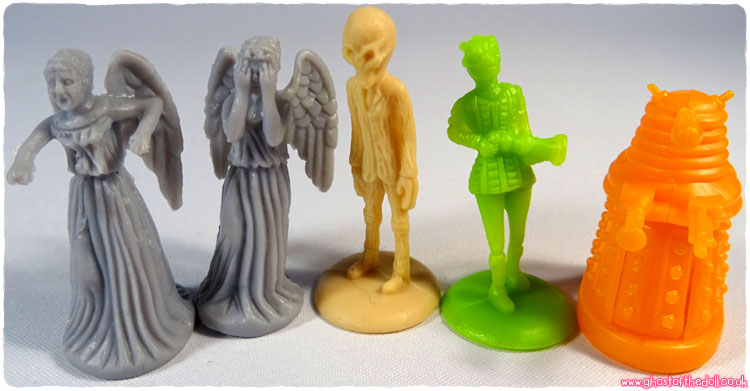 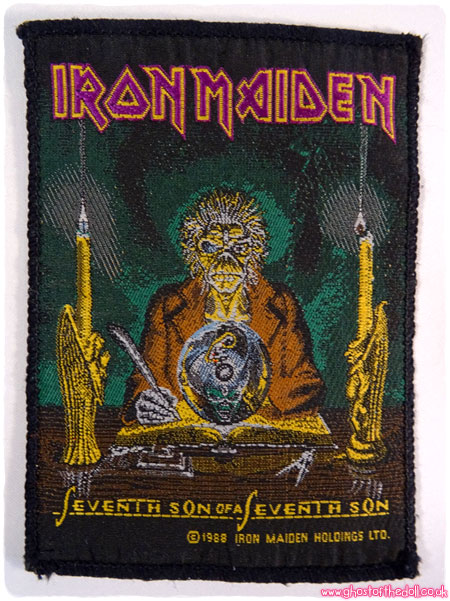 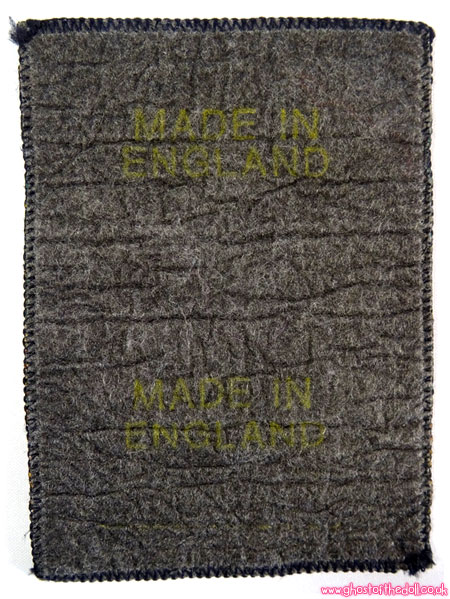